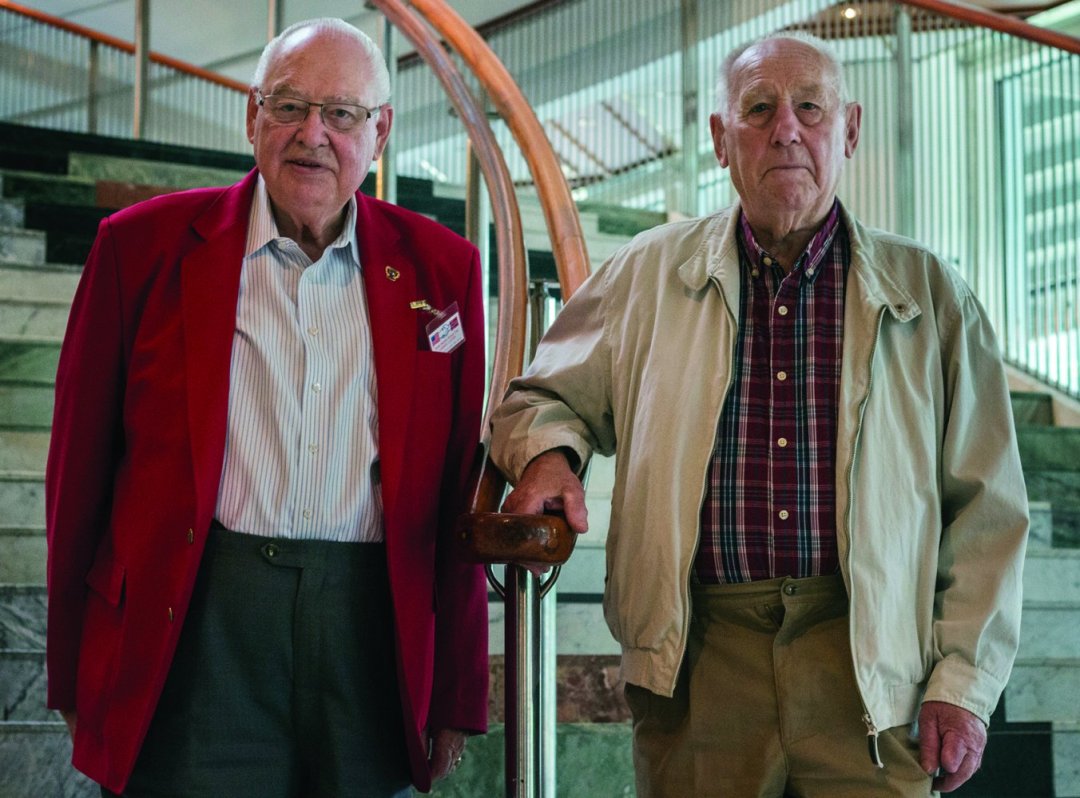 BY KAYCEE BOE AND RACHEL LEVY

Carrol Juven, 80, enters the Radisson Blu hotel in Oslo, Norway with a bright red jacket and a walking stick and greets his long-time friend Karl Nyland. This is Juven’s 154th trip to Norway, and the Radisson is his favorite hotel.

Juven is the operator of Juven Tours and Travel Inc., a Fargo-based travel agency that hosts Americans on Norwegian cultural tours.

He started his travel company in 1966, when he would charter flights for the Sons of Norway. By 1985, the small program he started had turned into a full-fledged travel agency. According to Juven, he guides tours every two weeks and has brought over 47,000 people on these trips.

The tours specialize in connecting travellers with their family members in Norway. All they need is your name and birthdate.

“You can’t imagine what a gratifying experience it is for them, and for us who find the families for them,” Juven said.

Juven himself was born in Fargo, but his family is from Hallingdal, Norway. Anyone who meets Carrol can quickly see his passion for the north. He is even a past president and 50-year member of the Sons of Norway, which is a fraternal organization made up of men and women of Norwegian descent.

“The organization’s goal is to preserve, maintain, and perpetuate the Norwegian culture, and celebrate all of the benefits of travel and social life within the organization,” Juven said.

He also loves of Norwegian food, including goat cheese and potato dumplings. According to Juven, the food is an important part of the culture, and a focal point for many Sons of Norway events.

As someone who spends plenty of time in both Norway and the United States, he recognizes the differences between the two countries. The most prominent difference is the way religion is handled. “Only two percent of people in Norway go to church but they all belong to the church,” he said.

According to the official website “Statistics Norway,” currently 71.5 percent of Norwegians belong to the Lutheran-affiliated state Church of Norway. Catholics make the second largest group of religiously affiliated Norwegians at just 2.9 percent.

Juven also said that for many Norwegians the language is an important difference. Most Norwegians speak fluent English, however most written material in Norway beyond tourist information is only found in the Norwegian language. Since Juven speaks and reads both English and Norwegian, he said the language barrier isn’t an issue for him.

While Juven makes many trips to Norway each year, he has also visited and loved many other countries. To date, Juven has visited 98 countries on five continents. One of his favorite trips is New Zealand in the summertime.

Juven Tours and Travel also provides trips from Norway to the United States, and that is where he met a longtime friend. Karl was on one of Juven’s agriculture tours in North Dakota when they first met and they’ve been friends ever since.

“I was one of the first Americans Karl ever met,” Juven said.

Now, Karl visits the United States one or two times a year, every year, to see Juven and attend Høstfest in Minot, North Dakota. Karl can’t speak English well, so Juven translates for him.

“He likes to come to the Minot fest,” Juven said. “He likes to hear the entertainers that are there from all over the world. He goes with me every year.”

Juven has no plans to slow down. He is guiding his family on a Norwegian tour to celebrate his 60th wedding anniversary in August. “So the kids, three of them, and their spouses and the grandchildren are all coming here, and my wife and I are taking care of it,” Juven said.

Juven will continue to guide regular tours both before and after his family’s visit.

“I have no intention of retiring,” Juven laughs. “Karl is retired, but I’m not old enough yet.”

Juven will be back in Norway on June 19, 2017, with his 155th tour. Radio personality Scott Hennen and his family are joining Juven on the trip.