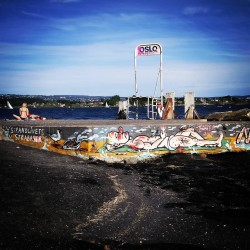 WE’RE NOT SO DIFFERENT YOU AND I

It’s been about a week since we returned from Norway. The experience itself was life changing. While Raul and I were there for ten days, the students had a month to immerse themselves in the culture of Oslo and dig their fingers deep into the underground dirt of what makes the city truly unique.

Three people out of 11 had the opportunity to meet up with their Norwegian relatives, while your editor had an opportunity to reunite with her German cousin. Exploring a foreign city with two separate cultural lenses is a very unique experience. Though less than 700 miles from Germany there were similarities but also very unique cultural distinctions, whether it be the national dress, mannerisms, and even social norms.

So a Swede, a German and a North Dakotan walked into a Norwegian bar…no joke.

Yes, our group was the table that would invite those without a seat to sit with us, which is common to us — but almost unheard of in Norway.

Karl, our newest Scandinavian friend, met up with my cousin and me one night and we had a conversation about these distinctions and laughed about these Americans that probably seemed very forward to the locals. Can you imagine a group of forward midwesterners?

The Norway many of us know is what we have heard from our elders. I had visions of intricately knit sweaters, lefse, rosemaling..and a little bit of blackmetal. Blackmetal aside, the things that I associated with Norway were the things that our Norwegian peers’ grandparents were used to.

Some young people we spoke to were astounded when a 30-something American spoke of attending rosemaling (traditional Norwegian rose painting) classes. One acquaintance mentioned that he went to school for avant garde fashion in New York — and when his American host mother suggested he make her a bunad (the traditional Norwegian dress), he was horrified. Why? Because he wanted an American experience and deemed the piece old fashioned.

Though nearly every Norwegian girl is gifted a bunad once they are confirmed, each region has their own distinct costume — complete with beautiful hand crafted intricacies such as Hardanger lace detailing. The Bunad is worn more often than one would think — and it is worn with pride.

At the same time, there’s a subculture that embraces their Viking roots. They have beautiful tattoos of Viking runes and pagan imagery. Two of the employees at a metal club we visited were listening to a contemporary band who played metal versions of Norwegian folk songs — one of its members even played the traditional violin parts — just a lot faster.

America’s youth are also quick to shed pieces of our culture that we deem old fashioned, while others are quick to embrace it. Though it does generate an interesting conversation about what we deem uniquely American. Culturally, what do we embrace and what do we cast aside?

Upon returning to the states I spent some time in my hometown and took my very German grandma to the Stutsman County Fair. She was quick to say, “These carnivals are nothing like the ones back home.”

The carnivals she attended were on the cobblestone streets of a beautiful medieval city situated on the River Rhine. No 4-H exhibits and no livestock barns — not one is above the other, each have their own unique attributes and cultural relevance.

From a cultural perspespective, there is something enjoyable about these nuances that are uniquely American. It’s easy to point out the ironies of what we deem staunchly American culture. Especially with the advent of Trump’s burlesque on “making America great again.” Believe us, there are a lot of ironies and ignorance — it’s OK to point those out too. It was hard to leave Oslo, but then again it’s good to be home in the land of mac ‘n cheese and Levi jeans. Plus, if the Oslo withdrawals get too bad — we may have to have a compare and contrast session in Oslo, Minnesota.

Steven Listopad, Henderson State University faculty and NDSU PhD candidate, has been an assistant professor of JMC and student media director at two North Dakota universities. He’s received honors from the Hefner Foundation, AEJMC, JEA, and SCJ for his work with New Voices USA and currently coordinates the New Voices USA website and the national campaign in conjunction with SPLC. His converged student media center at UJ was a finalist in North Dakota’s annual professional entrepreneurial competition, InnovateND, and he was a Scripps Fellow for Entrepreneurial Journalism. He has taught journalism in China, France, Italy, and Norway. He is currently the ieiMedia program director for OsloRocks, a music and culture international journalism experience. Listopad has been a member of CMA since 2005 and has served on the CMA and ACP Advisory Councils. He was chair of the CMA Adviser Awards Committee from 2013 to 2015. Listopad was honored with CMA’s Distinguished Multimedia Adviser Award in 2010 and has received two CMA Presidential Citations. View all posts by Steven Listopad